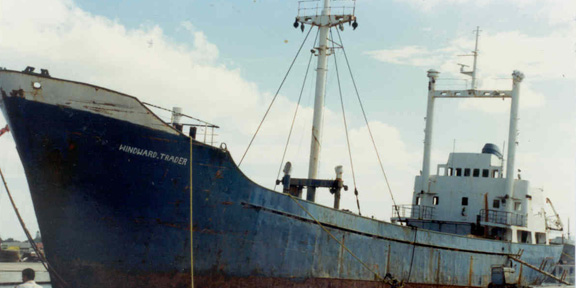 The Rodeo 25 was built in 1956 as the Nore. It is one of the more famous dives offshore Pompano Beach. This Dutch twin-masted freighter was built in the Netherlands in 1956 under the name the Nore. She was 215 feet long and in the years of her duty she received names as the Booker Trojan, Caricom Adventurer and Cari Gulf Venture. Under the name Windward Trader she became a wreck sitting at the Miami River waiting to be scuttled. During the 25th anniversary of the Pompano Beach and Fishing Rodeo on May 12, 1990 she was being sunk upright on the ocean floor with its two masts rising to fifty feet below the surface. More than 100.000 celebrators watched this perfectly planned event.

The wreck is set up correctly to allow penetration to the interior. The engine room also provides opportunities for entrance. It is a colorful wreck with some excellent pieces of soft corals and sponges adorning its sides. If you are a skilled technical wreck diver you can enter the freighter and take a look at its brilliant engine room. Other sights which should be visited are its wheelhouse.

Several smaller fish live on and near the wreck in its crevices, small holes and crannies. Larger pelagic fish such as amberjack and barracuda are often seen cruising by out in the blue waiting for an excellent meal. Bull sharks can also occasionally be seen in the area. The site is accessible with kayaks from the 16th St. kayak launch point.

To find out which dive charter boats are going to visit this site, and others like it, visit Scuba Schedules and navigate to the South East Scuba diving region.