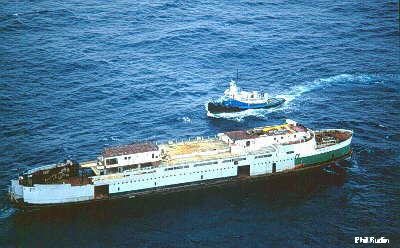 The Princess Anne is a 350 foot car ferry, once used to carry over 200 passengers and cars over the Chesapeake Bay, was sunk in the early 1990’s.

The vessel sits upright with her stern sitting in 105 feet of water and her bow in 95 feet of water. The hull begins at 100 feet of water and rises up to 72 feet. An excellent multilevel dive profile was created when a storm separated the wheelhouse from the main ship and set it beside the hull, increasing the Anne’s complexity, and attracting more marine life in the process. Because of this, one person can visibly shake the 350 ft. long 58 ft. wide and 52 ft. tall ferry, thus penetration is allowed for this reason.

Nestled near a beautiful reef system, those who are not trained in wreck diving have plenty to see outside of the ship. Schools of jacks, barracuda, parrotfish, Atlantic spadefish and the occasional shark swim through the surrounding waters and corals cover the structure of the wreck. Trained wreck divers can explore open rooms, some over 100′ in length, intact staircases, and other parts of the ship. Divers often have a seat at the marine head for a photo or a rest break.

This site is less traveled because of the 100′ depth and unstable positioning, making it an experienced diver only site. Although it has only been in the water a short time, the wreck has already established itself as one of the best wreck dives in the United States, despite being considered as the biggest and toughest wreck dive in the Palm Beach area in the non-technical class due to its usually swift current.

To find out which dive charter boats are going to visit this site, and others like it, visit Scuba Schedules and navigate to either the South East Scuba diving region.