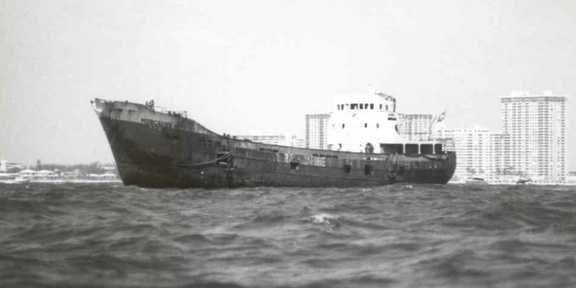 The freighter Mercedes I was built in Hamburg, Germany, in 1952. She was originally named Jacob Rusch and later renamed Rosita Maria and Rita Voge, before being given her final name Mercedes I in 1976. On November 23, 1984, a powerful storm ripped the freighter from her anchor and the storm left the Mercedes I high and dry on the beach up against the sea wall of Palm Beach socialite, Mollie Wilmot, who owns the house next to the Kennedy family compound.

The owners of the Mercedes abandoned her, leaving the state to try to pull her off the beach. After several unsuccessful attempts and three months of salvage workers utilizing heavy winches, they finally pulled the ship off the beach. At a cost of $223,000 from a Federal fund, the Mercedes I was finally pulled from the beach. Because the Mercedes landed on one of the most expensive stretches of beach (Palm Beach), the media frenzy made her famous. The ship was then purchased for $29,000 by the Broward County Environmental Control Board and prepared for sinking as an artificial reef. On March 30, 1985, as 20,000 spectators including millionaire Mollie Wilmot in the Goodyear Blimb watched, the ship was detonated and sank to her final resting place.

On August 24, 1992, Florida’s infamous Hurricane Andrew swept through the area with massive devastation and almost tore her in two. The wreck was partly broken mid-ship and has since separated even more, however, she’s still a beautiful dive. The Mercedes I now rests in 97 feet of water, one mile off the shore of Ft. Lauderdale on a sand and coral bottom. This wreck now abounds with marine wildlife. Divers can see many species such as schooling bait fish, bonito, jacks , barracuda, angelfish and parrotfish.

For divers interested in macro photography, this wreck is inhabited by hundreds of arrow crabs that make for a great shot. Average visibility ranges from 50 to 60 feet and the current can sometimes be strong so the wreck is for more advanced divers.