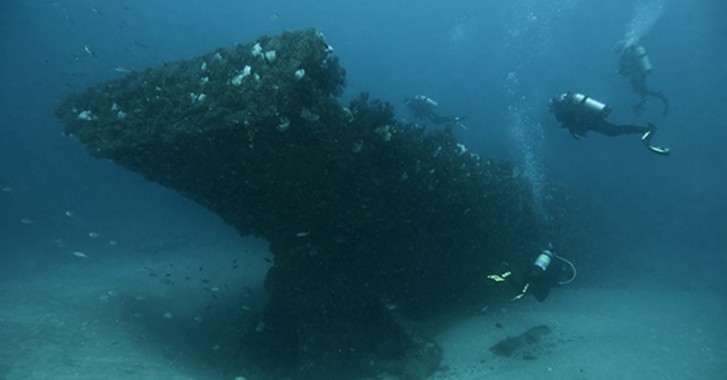 The Mizpah was sunk in 1968. The 185-foot Greek Luxury liner was sunk to serve as an artificial reef and fish preserve. The wreck lies in a north-south orientation about a mile northeast of the Palm Beach Inlet. The Mizpah lies upright and intact except for a split forward of the upper deck in 90 feet of water. It is a part of the corridor that is composed of two other wrecks, the PC1170 and Amaryllis, that line up to form a stunning 1700 foot drift dive.

The Mizpah is one of the most entertaining wrecks to penetrate and explore. Before her sinking, all the doors and portholes were removed for divers’ safety, leaving her well-exposed to light for the flushing effect of ever-present currents. Consequently, lights are seldom needed when exploring the wreck. With regards to its temperament, on good days waters over the wreck can be bright blue and clear, allowing a majority of the Mizpah’s profile to be seen during approach. But while the Gulf Stream can bring clear waters close to the Palm Beach coastline, it also generates currents that wash over the Mizpah at variable speeds that can range from barely perceptible to a robust flow of two knots or more. Because of these currents, local dive charter operations practice “live boating,” which involves dropping divers up-current of the target and allowing them to drift into the wreck as they descend.

Lying next to the Mizpah is PC1170, a 165-foot patrol craft. Some of the largest moray eels on the east coast make their home inside the vessel along with tons of fish, eagle rays, spiny oysters, and soft corals that cover the ship from bow to stern. Following a large rock pile, the Amaryllis is the third in line on this dive. The China Barge is the fourth in line on this amazing site, although most divers don’t reach it before needing to ascend.  As a dive site, The Corridor as a whole is an excellent training site for advanced, deep, and wreck specialties. During the late summer this is a great spot to observe the Goliath Grouper Aggregation.