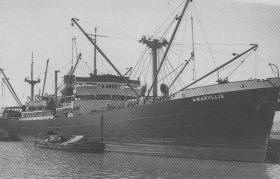 The Amaryllis was a cargo ship built in 1945 at Burrard Dry Dock in Vancouver, British Columbia, Canada. She was 441.6 feet (134.6 m) long and measured 7,147 gross register tons. Originally named Cromwell Park, she was built for the government of Canada to be used in World War II. In 1965, she ran aground during Hurricane Betsy off the coast of Florida and was later sunk in 1968 as part of Palm Beach County’s Artificial Reef Program. It now lies in 85 feet of water about a mile northeast of the Palm Beach Inlet and just 300 yards northeast of the Mizpah.

After several unsuccessful salvage attempts by the original owners and a Miami man who bought her from them, the ship was abandoned and became a menace to those people daring enough to board and wander through her, as well as a concern for the motel owner whose guests were annoyed by the sightseers and kept awake at night by clanging noises from the ship. Today the wreck is safe within a protected zone, an underwater metropolis, teeming with life and constant action. It is bathed constantly by the Gulf Stream, and lies just outside a marine estuary -a place where salt water species enter brackish water to spawn.

The deck of the ship was removed but the lower deck, helm, and helm remain intact. Divers are sheltered from the Gulfstream’s current by the ship’s hull walls and are able to comfortably drift the length of the wreck. The enormous engines and mechanical systems are covered with soft corals and attract a wide variety of marine life. Some of the edges, however, are very sharp so divers should be wary of them. Because the wreck lies in open sand, it has attracted many schools of fish including jacks, snapper, and other tropicals. It is also the home to many sportfish such as cobia, snook, and sailfish. Divers should take a lot of care around the sharp metal hull pieces.

As good as this dive is in the day time, advanced divers find night dives on it to be even more spectacular. Squids, bioluminescent life, black tip sharks, moray eels, and a million new faces show themselves to the night.