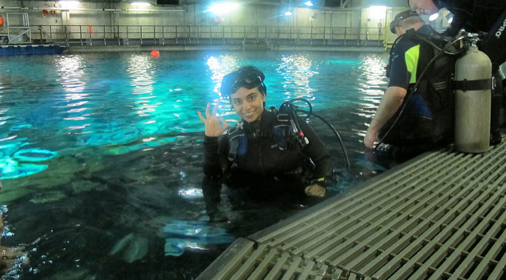 DiveQuest at The Living Seas: The last place divers would ever think about bagging a dive is at a major theme park, but divers can get a dive in at Disney World. The Seas with Nemo & Friends (formerly The Living Seas) is an aquarium and attached dark ride attraction in Future World at Epcot at the Walt Disney World Resort. There are sharks and tropical fish and a good time is guaranteed.

Dive Quest opened to the public on January 15, 1986. It housed the largest saltwater tank in the world at its completion, holding 5.7 million US gallons (22,000 m3) of water, but was surpassed in 2005 with the opening of the Georgia Aquarium. Disney re-themed it’s Living with the Seas ride in 2007 to bring in the characters from Pixar’s undersea adventure Finding Nemo. Divers will board a “clam-mobile” for a slow-moving ride through the pavilion’s massive aquarium tanks, onto which Nemo, Dori, Marlin, Crush, Bruce and other characters are projected. Once the ride is over, divers can linger in the exhibition areas to watch the many fish and sea mammals that live in the pavilion’s massive aquarium.