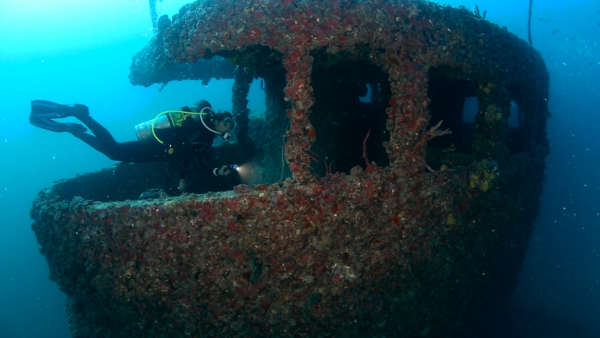 Thunderbolt: This 188-foot military ship is the jewel of the Marathon wreck fleet. It was built, along with 15 sister ships, by Marietta Manufacturing Company at Point Pleasant, West Virginia, under contract to the U.S. Army during World War II. The Thunderbolt, then named Randolph, was launched on June 2, 1942. These ships were built to plant and tend defensive coastal minefields for the Army’s Coast Artillery Corps. However, in 1949, this function and the Randolph were transferred to the Navy.

While in the Navy, this vessel was never commissioned and remained in the Naval Reserve Fleet, first in South Carolina and then in Florida. Caribbean Enterprises of Miami purchased the vessel in 1961 and later Florida Power and Light bought her for research on the electrical energy in lightning strikes—hence her new name, Thunderbolt. Eventually, Florida Power and Light donated the vessel to the Florida Keys Artificial Reef Association.

Sunk intentionally as a dive attraction in March 1986, she now sits perfectly upright in 115 feet of water offering 45 feet of relief. Her superstructure is now coated with colorful sponge, coral, and hydroid, providing refuge and sustenance to large angelfish, jacks, and a variety of deep-water pelagic creatures. Divers will want to investigate the huge twin propellers and descend into the engine compartment beneath large arches in the main deck. Her bow is dominated by a huge horizontal cable reel. Dropping over the stern of the vessel divers can examine huge twin props. Large hatches off the main deck open into the engine compartments where it is possible to descend into the hull to 110 feet.

The site is located 1 mile South-Southwest of Marker 20; 5 miles Southeast offshore of Marathon.