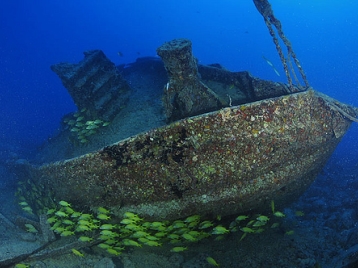 Joe’s Tug: Located just seven miles southeast of Key West, Joe’s Tug is one of the most popular and well-known novice scuba diving wreck sites in the Lower Keys area. Despite its somewhat misleading name, Joe’s Tug is actually an old 75-foot steel hulled shrimp boat that sank at the pier in Safe Harbor in 1986. It was then brought back on land to bet into an artificial reef, as experts cleaned the shrimper, removed the engine, and added metal braces to make it more stable. Joe’s Tug was first intended to be shipped off to Miami, but local legend has it that a group of pirates commandeered the boat in Key West harbor and it sank during their surreptitious getaway.

Joe’s Tug now sits in about 65 feet of water in the sand, no longer intact. In 1998, Hurricane Georges picked up the wreck and tore her in half. The bow and stern now lie about 30 feet apart, and the wheelhouse has largely disintegrated over the years. The hull is easily accessible and is usually filled with schooling fish. She sits up right on the ocean floor surrounded by soft and hard coral formations and large sponges. This wreck is home to some very friendly moray eels and inquisitive fish. Joe’s Tug is an easy and rewarding dive for both beginners and experienced divers

One of the best features that keeps both beginner and advanced divers alike coming back to Joe’s Tug year after year is its abundant marine life. The wreck is home for some enormous moray eels and barracuda, along with inquisitive fish that are often found in schools in the hull. Divers should also be on the lookout for the famous rumored inhabitant of Joe’s Tug, the Jewfish named Elvis. Night diving brings out an even more vibrant marine community. Small crabs and lobsters are often seen walking along the decks of the wreck to find some food for dinner.

While Joe’s Tug may not be overly exhilarating for expert divers, this site is a perfect option for an easy and relaxing dive providing the currents cooperate.