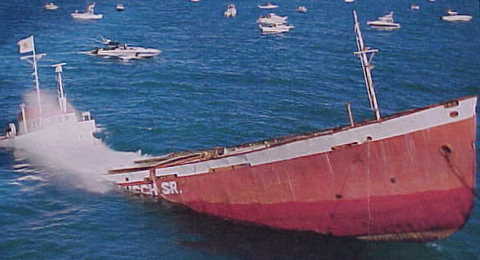 Adolphus Busch: Marked by a series of mooring buoys, the remains of this 210-foot freighter lay 6 miles southwest of Big Pine Key. The ship was built as London by the Burntisland Shipbuilding Company, Fife, Scotland, for the Dundee, Perth & London Shipping Co Ltd, Dundee and was launched on 20 December 1950. She sailed under a number of names during her career before she was wrecked at Port-au-Prince on 24 September 1998 under the name Ocean Alley.

The Adolphus Busch rests upright on a sand bottom at an average depth of 80 feet (24.3 meters). Maximum depth is 110 feet (33.5 meters). It was intentionally sunk in 100-feet of water in 1998 to create an artificial reef system. The vessel is intact and upright. Because of its location in a protected sanctuary, no explosives were used during the sinking of this ship. As a result, she merely endured the placement of 12 holes above her water line. She then had water pumped in to her hull until she could no longer stay afloat. This ship remains in great condition and is a good site for exploration. The 12 large holes make for easy swim through paths and allow entrance in to the ship.

Three goliath grouper (“jewfish”) frequent this dive site, the largest weighing in excess of 400 pounds. This is a good dive for nitrox. The wreck is fully penetrable, and can be entered through the bridge or cargo holds. The machinery in the engine room is still present and presents the only major entanglement hazard to divers. The glass from the wheelhouse windows and the covers to the cargo holds have been removed. It is recommended that divers who visit this site have an advanced open water certification.