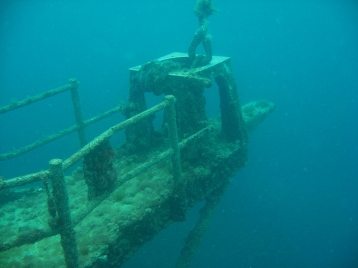 The Santa Lucia: In 1994, 29 refugees fleeing Cuba used the Santa Lucia, a 47 foot turtle boat, for their voyage to the United States. In 1997 the vessel was brought out of storage in a Naples boat yard and towed to sea to become part of and artificial reef site. While being towed, the boat began to take on water and sank well short of the intended deployment site in 24 feet of water about 3.8 miles west of Gordon Pass.

In an effort to hold the wreck in place, concrete beams and pylons were placed on and around the wreck. Massive swirls of baitfish are a common sight, and several Goliath grouper can be found hanging out in the ship’s cabin. French Angelfish, chromis, frogfish and Sergeant Majors are also key fishes to spot. Look for colorful longsnout seahorses on most dives. Hawksbill and green turtles can be found swimming leisurely along many reefs. Huge barrel sponges and colorful tube sponges dot the reefs.

Because of its proximity to shore, this is one of the most frequented reefs in Collier County. Because it sits in shallow water, it also is one of the most accessible wrecks for novice divers. Visibility can be an issue, sometimes five feet or less, and because it also is a popular spot for fishermen as well, there is a possible risk for entanglement with discarded lines and nets.