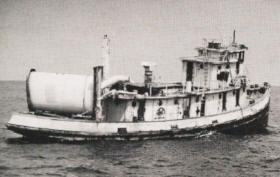 The Grey Ghost was a 105-foot U.S. Navy commissioned tugboat. It was sunk as an artificial reef on July 12, 1978. It lies over 20 miles from the St. Andrews jetties and is a popular site both for fishermen and divers.

Being part of the Artificial Reef Program, the site developed a large variety of sea life and became a favorable spot for underwater photography. The steel hull and superstructure are mostly intact. The engine has fallen through the rear cabin area and now lies next to the hull. The wheelhouse is one of its best spots for photography. The tug lies on its port side in 108 feet of water. Because of its popularity with sport fishermen, there is a lot of monofilament tangled on the wreck, so divers are advised to bring cutting knives.

This is an all-day dive site due to its distance from the jetties. Because of its depth, it is considered as an advanced dive site. As said, it is a great underwater photography site with its considerable amount of marine life and its superstructures acting as strong, prominent backgrounds. The site is also gifted with good visibility.

To find out which dive charter boats are going to visit this wreck, and others like it, visit Scuba Schedules and navigate to the the North West Florida scuba diving region.