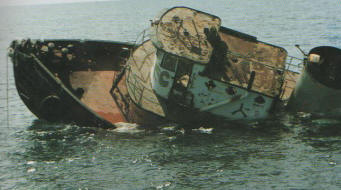 Coppedge Tug: Located 20 miles offshore in about 80 feet of water, this site is home to schools of baitfish so dense divers can barely see through them upon arrival. Originally named the Achilles, the 96 foot steam tug was commissioned in the 1930’s. She was owned by Sabine Towing & Transportation Co. of Port Arthur, Texas. She hauled loads between Texas, Cuba and Puerto Rico for most of her life. In the early 1960’s, the Achilles was sold to Florida Towing Company and renamed W.T. Coppedge Jr. In 1976, Moran Towing Corporation acquired Florida Towing and the Coppedge’s ownership changed once again. By the mid 1980’s, the old tug was no longer economically feasible to keep in service and was donated to form an artificial reef. The Jacksonville Scubanauts conducted a site survey, and the tug was sunk by the Jacksonville Offshore Sport Fishing Club in June of 1988.

The Coppedge now sits upright and intact in 80 feet of water 22 miles off the Mayport jetties. According to the Scubanauts, large schools of bait fish surround the wreck. The tug’s hull surface is almost completely covered in barnacles, oysters, bryozoa and hydroids, and divers will see angelfish, barracuda, cobia, grouper, and amberjacks on the site. Culverts and pillboxes are part of this impressive artificial reef. The pilothouse can be seen from about 50 feet which makes this a nice dive for the novice as well as more experienced diver.

The large schools of baitfish, as well as Grouper, Snapper and large Amberjack silhouetted against the wreck make for some excellent photo opportunities. Not a difficult dive, this could be a nice addition to a weekend of final certifications with the more experienced and safety divers to monitor the novice divers.