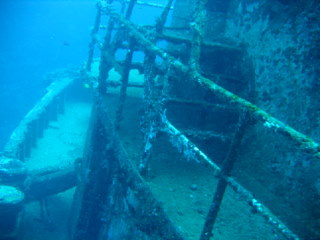 All Alone: The wreck, located one mile southwest of Western Sambo on the Ten Fathom Ledge is the wreck of a tugboat known as All Alone. Unfortunately there isn’t a lot of information about the history of the tugboat or how it came to sink off the Florida Keys, which means that most of what you can learn about the tugboat you’ll need to discover in person.

At a depth of 90ft, the broken remains of the 70ft hull is known for the large amounts of fish that inhabit the site inclusive of grouper and snook. The split hull allows for the large amounts of fish that make the All Alone their home. Common species found on the All Alone include pelagic species like barracuda and snook, grouper, and a variety of smaller fish that are preyed on by the larger pelagic species. Going down into this wreck will guarantee a plentiful and consistent view of a large variety of sea life.

The wreck is also located on the Ten Fathom Ledge which has some amazing and unusual structural characteristics worth seeing. A waterproof camera would serve divers well in this wreck.